huh... I only copied what someone else had put down as a total % chance. math looks goo to me and it matches the patch notes too

I changed the number based on the numbers on the machine gun page. 39+28+6=73. I think I might have fat fingered somewhere for the 1 extra. If these numbers are wrong then we need to change them. Peckham33 talk Help is always given to those who ask for it 17:06, 21 February 2013 (UTC)

Here is the section for the Machine Gun;

so then its a 57% chance to get at least one critical ? there isn't a nice equation for me to look at to derive an answer from.

The impulse is multiplied by the damage of each weapon to calculate how much cockpit shake they cause.--Seth (talk) 14:06, 22 February 2013 (UTC) 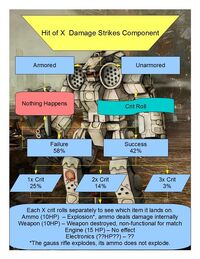 Results of a Critical Hit[edit source]

When ammunition is destroyed by a critical hit, it explodes and deals the remaining potential damage of the ammunition to the internal structure where it is stored. It will not cause other ammunition housed in the same location to detonate, but the damage done by even a partially empty ammunition magazine can be enough to destroy the section is is housed in and deal damage to the next area it is attached to. An exception to explosive magazine is the ammunition for the Gauss Rifle. The ammunition for it is inert metal. The Gauss Rifle itself though can explode for 20 points.