Identify Your Role / Pick A Battlemech That Suits Your Role[]

Before you even pick your Battlemech you should identify the type of player that you are. Your play style and the role you want to play in the group will usually determine what 'Mech would best suit you. You should be piloting a 'Mech that fits your role and style of play.

Do you prefer to operate on your own? Are you the guy that likes to flank behind the enemy or scout them out? Maybe you like to be the distraction, keeping the back lines busy while the front line troops get into position. The roles that best suit those type of players is Scout, Headhunter (gets behind the enemy, shoots them in back or head) or Decoy. Fast moving light and medium 'Mechs are best suited for these roles (e.g.: Jenner, Raven).

The scouts job is to identify the enemy 'Mechs so you can prioritize the major targets. They also can flank the enemy, get behind them to core them or be used to draw them out. Often times players will get stuck into the first person shooter mentality and want to focus on someone trying to get that kill shot. When they are focused like that they tend to lose focus of their team and try to continue after them to kill them.

Strikers are generally fast BattleMechs, second only to Scouts, and armed with what would be considered a loadout of heavy, close-in weapons. In their strike role, they run in to face the enemy units and then let loose with as much firepower as they can unleash quickly. Generally operating in lance formations with other Strikers, they'll attack one designated target until it is removed as a battle-capable unit or it become to risky to continue the attack. While often costly in 'Mechs, these bold tactics often inflict significant damage to the enemy.

Do you prefer to prioritize firepower? Do you like to engage from a safer distance or in support of your engaged allies? Maybe you like to shoot at long range with missiles or snipe at the enemy with your PPC and/or Gauss Rifles. The roles that fall into the support class are usually long range 'mechs or escorts.

Support Roles come in a relatively wide variety. Some examples are Missile Boats, Snipers and Escorts, however there are more. While many types of support seem to have little in common, the common thread is that they prioritize range, firepower and/or support systems over speed and/or durability, and tend to be among the most vulnerable mechs when singled out. For this reason Supports shine when used to inflict damage, suppress the enemy, or protect teammates when the frontline is engaged. Supports also often sport ECM, AMS, and targeting computers, to protect against LRMs, and improve firing. When dealing with the role of support, don't be afraid to experiment with your squad.

Defending your base often falls into the hands of Supports who stay the farthest behind. Support mechs don't need to stay at base but should be ready to run back if situation requires it.

The archetypal Support mechs, Snipers and Missile Boats are BattleMechs associated with a specific fire-support mission on the battlefield, as characterized by the powerful long-range primary weapons. Though slow compared to the faster Skirmishers and Strikers, speed is not as much as a factor when used at a distance that protects them from the majority of counter-fire. Though this use of a protected position (also known as a "sniper's nest") is shared by Snipers and Missile boats, the two are differentiated by the latter's use of indirect fire weaponry. Since the Sniper cannot attack from a completely hidden location, it usually fires from woodlands or other partial cover. It is common to have Snipers protected from fast enemy units by Strikers or Brawlers.

Missile Boats are known for their use of numerous long-range missiles, whereby they attack the enemy from a protective distance with indirect fire. In order to either protect the Missile Boat or take full advantage of its mission, Scouts, Skirmishers, Strikers and Brawlers generally observe and possibly engage with the targeted enemy units, while the Fire Support launches from behind full cover, such as a hill.

Sometimes a lighter, faster Mech will serve as fire support, in which case it may operate from a deep flank alone or with an escort. Lacking the raw fire power characteristic of a normal Fire Support, they will instead harass the opponent, potentially flushing them out of cover or drawing attention only to disengage and attack from a different position.

Skirmishers are considered to be 'Mechs suitably adapted to a fluid combat environment. They tend to have versatile builds with a reasonable balance of speed, range, firepower, and often to a lesser extent: durability. While often seen harassing the enemy or escorting lighter mechs, they are usually capable of directly engaging well enough to inflict appreciable damage. This allows them to engage almost whenever and wherever there is a need or opportunity. Their flexibility allows a battlefield commander considerable leeway when compensating for both tactical situations and local topography. While their flexibility can allow new players to contribute without being locked into a role, the lack of a clear and specific role can make it difficult to master, since the pilot must be just as flexible as the mech they're piloting.

Often the first to openly engage the enemy in direct battle, these medium and heavy mechs have the power, durability and sustainability to engage the enemy and see the fight through to the end. The Brawler is a mean machine that sacrifices range to focus on speed, power, durability and often heat management. This mech bridges the gap between the Striker and Frontline types. While the Brawler can perform a frontline role when it's possible to close the distance safely, they will often remain in the second line at first, serving a defensive role of protecting the larger slower mechs from packs of light mechs. When the fight is truly under way the Brawlers will switch to an aggressive approach, closing the distance to apply heavy pressure and overwhelm engaged foes. Because they must often commit to a battle once they engage, Brawlers will often have good heat management so that they don't run out of steam before they can secure the kill.

Where the Brawler is like a heavier Striker, a Frontliner is like a lighter Assault or slower tankier Skirmisher. Compared to a Brawler they have less speed, but place an even greater focus on durability and often battle at mid-range rather than short, and may even have some long range capabilities. The Frontline mechs' job is to engage the enemy and survive long enough to allow other mechs to do their jobs. They are the mechs that will take over for a damaged Assault, sharing armour and making sure the team doesn't get run over. Because they will be directly engaged with the enemy often, Frontliners are expected to have decent damage potential.

Do you prefer to be the big heavy? You like to wade into battle like a warrior, get into the thick of it and just unleash everything. Your role in battle is usually the Assault.

This isn't the easiest of roles, as you can get easily overwhelmed. Just because you are the biggest bully on the block doesn't make you invincible, and a poor maneuver may be slow or impossible to recover from. If you become stuck in battle and are overheating constantly, then you can't direct your fire effectively. It may be difficult to accurately fire on close, faster targets, also leading to overheat and potentially making you the primary target for the enemy team. The advantage though is riding around in one of the toughest, best armed mechs around. Your job is to lead the charge and inflict heavy damage on whatever enters your sights, but as such you need to refine your battlefield assessment skills, otherwise you'll be leading a doomed charge.

An Assault mech taken to the extreme, Juggernaut units are designed with weaponry and armor foremost, speed being a minor consideration. All these 'Mechs need to do is advance slowly but steadily in order to break a line. They are rarely fielded because they are easy to outmaneuver, when they do reach the battlefield something is going to die. When paired with Skirmishers and Strikers they can be very devastating.

Picking a Battlemech is also important because not all 'Mechs are the same. Be sure to look at the hardpoints for the mechs here. Let's say you wanted to versatile design and you picked something you thought you could easily swap out weapons. For the most parts weapons are easy to swap out but you are still limited to the amount of hardpoints. You pick your 'Mech and decide you like but want to protect your missiles more so you want to move them from your arms to torso. As you can see you won't be able to do that. So if you bought this design with the hopes of adapting it to your needs you might find it won't do exactly what you need. After you identify what role you like to play, it is important when you pick your 'Mech that it not only suit you but plan ahead for what you may need it to also do in the future. 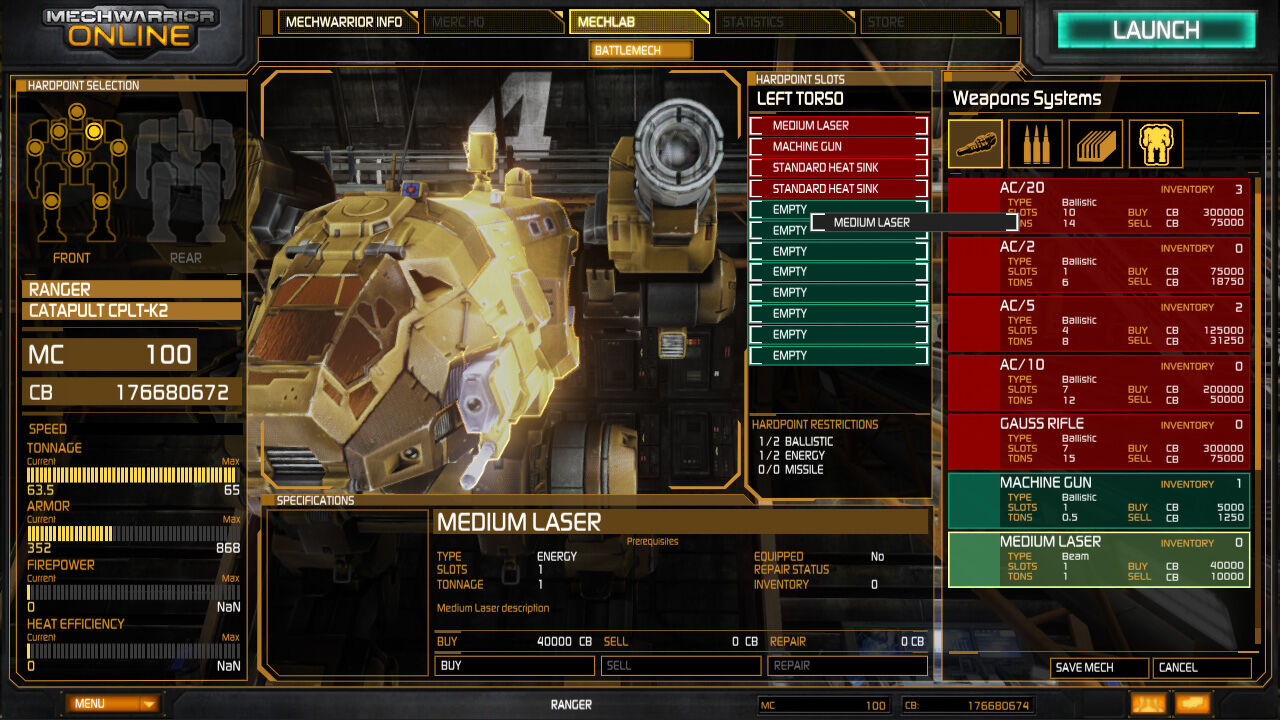