Preface - There are many different designs and manufacturers of 'Mechs in existence, whereas MiG acts as a common denominator. Leaving out producers promotional promises, we created a comparable base of hard facts. The purpose is to have an independent source of information for 'Mech pilots, which entrust their well-being to a modern but complex combat vehicle, that we are devoted to making transparent.

The pilot follows a standard procedure for starting up the reactor and systems which that automatically performs a self-diagnostic reporting the statuses back to the pilot. 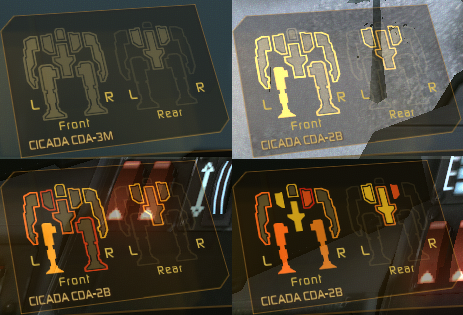 The condition of a BattleMech's armor is displayed by a color-graduation:

Once the outline disappears the armor for that section is destroyed ; exposing internal structure and systems. At this point the internal damage level is displayed.

Going clockwise from the upper left the sample paper dolls to the right indicate the following:

The condition of a BattleMech's internals status is displayed not only on the paper doll but also on the screen with individual systems (weapons, AMS, ECM, etc.) if they become disabled. Some systems' destruction is only noted by an audio warning from the on-board computer (such as heat sink destruction). Individual systems become susceptible to critical hits once exposed by destroyed armor or through severe overheating. The internal structure damage is displayed by a color-graduation:

Once the section disappears that section is destroyed along with any systems contained within it. A 'Mech can survive the complete destruction of all but the following areas:

If an individual system is disabled the pilot will be alerted with an audio message from the computer along with the system being dimmed on the HUD if it is normally listed there.==

Commonly a BattleMech's driver has a straight forward view, looking out of its cockpit to the where its front torso points. Depressed 'Left-CTRL' (default) lets mouse maneuvers move the driver's head, allowing to freely look inside and out of the cockpit.

In order to support a BattleMech pilot in having all critical information at hand, most essential information is projected infront of his/her field of vision, onto a small device, a transparent screen/monitor, called the Head Up Display (HUD) - some other HUDs project information directly onto the front windshield of a cockpit, but they dont move with the pilot's head.

enemy intel gathering, 3 steps...tbc (if I find again)
stauts is color coded according to your 'Mech's status ... target's current weapon loadout is displayed to the left of the armor display, model right under it.

Health in percentage, distance in meters, name of driver and 'Mech-type (or 'Mech's name?)

reaching 100% will initiate emergency shutdown programm ... can be overrun tbc

This is the standard controls configuration throughout all 'Mech series and models. It is reassignable at Game Options.

Mouse-wheel might not be recognized by options; if unable to bind:

ask someone from an esports league what to think of force-feedback stuff -.-

Although there are some other designs our scope is on Biped 'Mechs only. 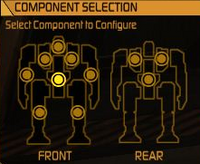 'Mechs are huge and a complex matter. The following is a complete list of components and locations of a 'Mech servicable by pilots.

Each of a 'Mechs components might come with predefined holding-fixtures (Hardpoints), fixed locations where specific weapons (rarely equipment) can be mounted. Three different types of Hardpoints are in existence:

Commonly, Equipment is not Hardpoint-specific and can be mounted in any location on the 'Mech with enough free Critical Space and tonnage for it, with a few exceptions:

on models with arms

The Internal Structure, the skeleton of a 'Mech, is listed as a Structure option in the Mechlab. A 'Mech pilot has to measure pros and cons of several materials being available:

The primary defense against malevolent force to the 'Mech is its Armor, which is listed as an option in the MechLab.

A 'Mech pilot has to measure 'Pros and Cons' of different materials being available:

Responsible for the speed and mobility of a 'Mech, its an essential decision to choose the right engine for your needs, which is explained in details.

Each time a weapon is fired, it creates its own specific amount of heat (chart), adding to the 'Mechs overall heat. Therefore a 'Mech's temperature rises, both by firing its weapons (or Jump Jets) but also by being fired upon (Flamer).

Depending on its weight, each 'Mech has its own thermal threshold. This threshold can be increased by adding Heat Sinks to the 'Mech, which additionally increase the rate at which the 'Mech dissipates its heat into the surrounding environment. The ratio, of a 'Mechs heat treshold and dissipating rate opposed to the potential heat increase of its mounted weapons, is called Heat Efficiency, expressed by a (theoretic) value of up to two, where higher numbers mean better heat management.

Since Heat Sinks interoperate with the environment they are used in, they depend on the Heat Neutrality of their environment. Which means the cooler the environment, the more efficient Heat Sinks will operate. When exposed to water, the cooling effect will even increase (if it's not boiling) - taking this into account with 'Mech size and water depth, some pilots might want to add Heat Sinks to their 'Mechs from the bottom up.

To cool his/her 'Mech a pilot has the choice of different cooling-types available:

As with the Hardpoints already pointed out, there's three different types of classes, being:

As progress continues new weapons will emerge, so far only rumors tell about Experimental Weapons.