This page is about the Battlemap (or Battlegrid, Grid) and the Lance Commander.

A small version of the Battlemap can be found in the HUD of the Cockpit, which comes with some differences.
A comprehensive overview to the different playable maps can be found at Maps.

Note, there's no need to be equipped with a Command Console to call the grid or become a Lance Commander. 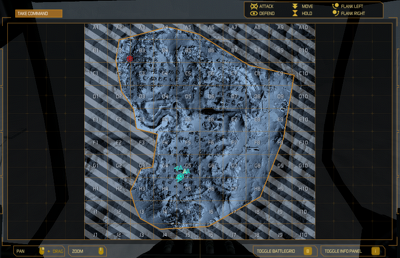 Key-'B' (default) will toggle the Battlegrid, which is dominated by a central map of the actual battlezone. If the grid is active, only battlegrid related functions are available! (note2self: do i lose control? mouse still moves upper torso, what about speed/left/right? nevertheless, mousebuttons and 'i' are reassigned - what if 'b' is reassigned, which key will work?)

Top left of the map holds the

Top right of the map is a short instruction on the commands available to the Lance Commander.

Along the bottomside goes an overview on all available actions that can be taken, as described below. 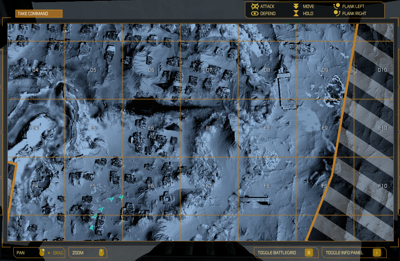 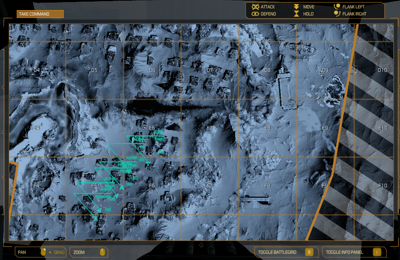 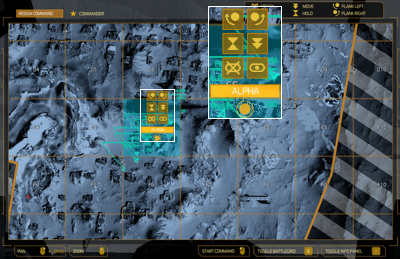 Upper left corner is the

button, which, if succesfully activated, makes you lance

and extends the functional range of the mouse.

If the command of the lance is successfully taken 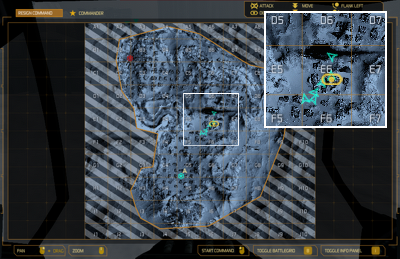 A Lance Commander can left-click to

sequence at the designated spot of the map.

Upper right corner holds a cheat sheet on commands available to the Commander:

(no use to click on it, commands are issued directly on the map!)

A command is activated and issued to all lance units by left clicking on the map and chosing a command from the popup, at which a new waypoint is created, that shows the assigned command.

Lance units will have a new waypoint on their heading tape (similar to Capture Points). This allows team mates to easily orient themselves towards the new command waypoint.